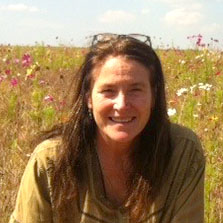 ‘LondonSWF is a marvellous celebration of Screenwriting talent and storytelling from all over the world. It unites our writing community, giving writers a venue to share experiences, learn from masters, explore possibilities – and hone their craft. It’s the best festival of its kind – being a part of it is an absolute joy.’

Karol Griffiths is a successful script editor and development consultant with over twenty years of experience – her recent clients include BBC Writers’ Room, SKY Arts, Bridport Prize and The Literary Consultancy. Her best-selling book The Art of Script Editing – A Practical Guide has helped thousands of writers and script editors improve their scripts.

Her diverse career began in the theatre, working with some of the most respected companies in America, including: The Steppenwolf Theatre Company, The Public Theatre, Yale Repertory Theatre and on Broadway.

She segued into film and television as a reader and script supervisor and progressed into development and script editing – working for a wide variety of talent, production companies and studios, including Warner Brothers, Universal, Disney, Paramount and Fox Studios, as well as Amblin Entertainment, The Coen Brothers, Working Title, Rajski Productions, Interscope Pictures, Sandollar Productions, Revelations Entertainment, BBC, ITV and La Plante Productions. Karol headed up Lynda La Plante’s script and editorial department for three years and was an intricate part of her development team.

A career highlight was working with the Coen Brothers assisting in the development of The Hudsucker Proxy and The Big Lebowski. Her other feature film credits include Under Suspicion, Nights in Rodanthe, The Flintstones, The Last Supper and Archipelago. Her Television credits include Above Suspicion for ITV, Roseanne, Friends, Just Shoot me, and How I Met Your Mother.

She is currently a reader for the BBC Writers Room and for The Literary Consultancy in London. She also develops and consults independently, and she is passionate about working with writers. She has a Master of Fine Arts Degree from Yale School of Drama and a Script Development Diploma from NFTS… MORE

LSF was just Brilliant. I've already had a follow-up email from one of the executives I pitched to..."