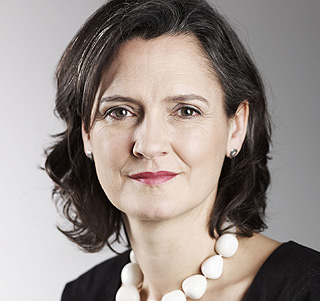 Kate Harwood graduated from Birmingham University with a degree in Drama before becoming an Arts Council trainee director and then Literary Manager of the Royal Court Theatre.

She joined the BBC Drama Serials Department in 1990 where she worked on many productions, first as a script editor (BAFTA winner Holding On), then as a producer (Close Relations, Bafta winner Charles II – The Power And The Passion, David Copperfield) and executive producer (Daniel Deronda, Crime And Punishment).

She was appointed Executive Producer of EastEnders in March 2005 and took the show to a position where it won a BAFTA and two National TV Awards.

In October 2006, she was appointed Head of Series and Serials, BBC Drama Production and in 2008 added the single drama slate to her portfolio to become Controller, Series and Serials. Under her leadership, the department has delivered critically acclaimed and award-winning dramas including Cranford, Tess of the D’Urbervilles, Silent Witness, Five Daughters, Luther and Silk.

In December 2012, Kate was appointed Head of Drama Production, England. In this role she has overall responsibility for all in-house drama series and serials production in London and Salford and the Continuing Drama Series EastEnders, Holby City and Doctors, as well as Casualty, which is made in Wales.

I really enjoyed the PitchFest and meeting writers face to face."