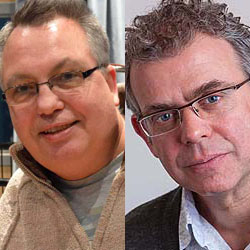 In 1995, Richard and Bev sold a spec script which opened the door to 20 years of professional writing in film, TV and radio.

As well as 14 movie commissions for major players like Warner Bros, Universal, Pathe and BBC Films, they have TV credits on a diverse range of shows, including Going Postal, Wolfblood, Robin Hood, Primeval, Kidnapped and Sinbad.

They are currently writing a movie for Fox Searchlight, as well as rebooting Dan Dare for a brand new radio series.