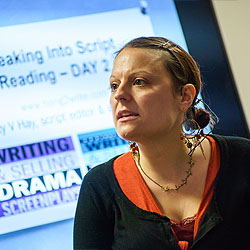 Lucy V Hay, aka Bang2write, is a script editor, author and blogger who helps writers.

Lucy is the script editor and advisor on numerous UK features and shorts. She has also been a script reader for over 15 years, providing coverage for indie prodcos, investors, screen agencies, producers, directors and individual writers.

Publishing as LV Hay, Lucy’s debut crime novel, The Other Twin, is being adapted by Agatha Raisin producers Free@Last TV. Her second crime novel, Do No Harm, was a finalist in the 2019 Dead Good Book Readers’ Awards. Her latest title is Never Have I Ever for Hodder Books.

Lucy V Hay is appearing at the following sessions:

Invaluable – indeed, life changing. I learned so much, met so many interesting, helpful, talented people, and came away from it bursting with inspiration and enthusiasm..."