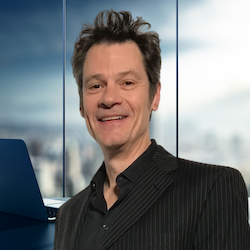 Mark Sanderson is a screenwriter, script consultant, author, blogger, and lecturer blessed to be living his childhood dream of making movies with screenplays written in a wide range of genres. His work ranges from sketch comedy writing and performing as a founding member of Los Angeles based The Amazing Onionheads sketch troupe, writing for MTV, his spec sale, two dozen screenplay assignments, to the television premieres and worldwide distribution of his fifteen films including the WWII drama I’ll Remember April, Christmas films Deck the Halls and An Accidental Christmas, submarine action films Tides of War and Silent Venom, and thrillers Suburban Swingers Club, Family Vanished, One Small Indiscretion, A Night to Regret, and Mommy’s Little Girl among others.

Mark’s films have been recognized at festivals including I’ll Remember April premiering as the opening film at the Palm Springs Int. Film Festival, and his other films with premieres at the Hawaii Int. Film Festival, St. Louis Int. Film Festival, The Rainbow Festival in Hawaii, Newport Beach Int. Film Festival, and Fort Lauderdale Int. Festival. His long association with award winning Hollywood filmmakers dates back to his first produced screenplay and has since worked with Academy Award® winning producers, veteran directors, and has written films starring Academy Award®, Emmy®, and Golden Globe® acting nominees. His latest short film, “:60 Seconds” is out to film festivals, and his first book, “A Screenwriter’s Journey to Success: Tips, Tricks, and Tactics to Survive as a Working Screenwriter in Hollywood” is available on Amazon.

Mark Sanderson is appearing at the following sessions:

The Screenwriter’s Journey To Success with Mark Sanderson

Mark Sanderson is here to prepare you for your own journey with the tactics developed over the past twenty years of working in the film industry.