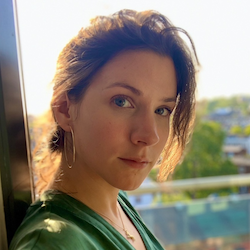 Miranda Ballesteros is an award-winning producer, presently heading the Film and Television department at Stink.

In 2018 she produced Farming starring Kate Beckinsale and Damson Idris. The film debuted at the Toronto International Film Festival and went on to win the prestigious Michael Powell award for Best British Debut at EIFF. It was released in 40+ countries by Lionsgate in the UK and EOne in the US.

Miranda cut her teeth as Head of Development at Montebello Productions, working closely with producer François Ivernel. She then enjoyed a brief stint at Paterson James Film and TV completion guarantors, where she was responsible for monitoring the production and assisting the financial and legal closing, as well as delivery.

She is a National Film & Television School’s MA in Production graduate and the winner of the IOSH award for her graduating film.

Prior to pursuing a career in the film industry, Miranda read Law and International Politics. She is a member of the Madrid Bar Association.

Stink is looking for high concept stories for film & TV, with an edge and an international scope. We are looking for diverse and eclectic points of view, stories that confidentely challenge the usual genre definitions and are not ashamed of being unconventional. If your idea is “bonkers” or “out there” then it is probably a good fit for us. We gravitate towards the visual and visceral and are looking for escapism and imagination. Female-centric projects are strongly welcomed!

LSF feels like school, uni and the warmest, snuggliest part of my bedroom all rolled into one!"