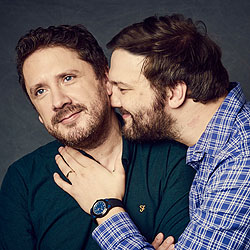 Nat Saunders has a successful career in writing, producing, acting and directing dating back to contributing sketches for Big Train and Smack the Pony in the early 2000s. Since then he has worked on shows such as Trollied, Cardinal Burns and the viral hit Misery Bear, sold many pilots in the US, worked on the movie Holmes & Watson, and co-created and wrote Sky1/Netflix comedy Sick Note with his writing partner, James Serafinowicz. Nat is currently Creative Director at Stolen Picture, the TV and film production company founded by Simon Pegg and Nick Frost.

James started out as a runner on Channel 4’s The Armando Iannucci Shows, Big Train and the Brass Eye Special, gaining writing credits on Brass Eye and Big Train. From there he has had many successful collaborations in both the UK and the USA, including The Mark Steel Lectures, The Peter Serafinowicz Show, Holmes & Watson and co-wrote and co-created Sky 1/Netflix comedy Sick Note with writing partner, Nat Saunders. James is currently Creative Director at Stolen Picture, the TV and film production company founded by Simon Pegg and Nick Frost.