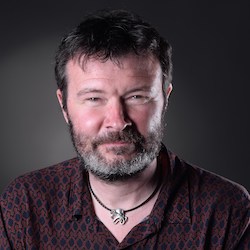 Pat Higgins is a British scriptwriter and director, described as the ‘Essex Auteur’ by Empire and ‘the Tarantino of budget gore flicks for style and dialogue’ by SFX.

Pat has lectured in screenwriting and idea generation at universities and colleges for over a decade, and his live talks are regularly scheduled at stages ranging from international film festivals to TEDx.

His latest project, a musical horror-comedy called Powertool Cheerleaders vs the Boyband of the Screeching Dead, was the most popular Kickstarter film project in the world (out of over 74,000 live film projects at the time) at several points in October 2020. The film has just completed principal photography and will be released internationally in 2022.

In addition to his credited works, Pat also works as an uncredited script doctor and freelance copywriter.

Pat’s Write a Movie in 30 Days challenges for London Screenwriters’ Festival in 2020 and 2021 proved to be extremely popular.