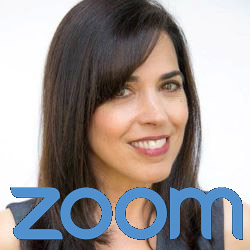 NOTE: This session will take place via Zoom

Pilar Alessandra started her career as Senior Story Analyst at DreamWorks SKG. In 2001, she opened the Los Angeles-based On the Page Writers’ Studio, dedicated to teaching and consulting with screenwriters and TV writers at all levels.

She’s the author of the top-selling scriptwriting book, The Coffee Break Screenwriter, and host of the popular On the Page Podcast. An in-demand speaker, she’s taught seminars at Disney Animation, ABC, CBS and MTV, and traveled the world teaching in the UK, China, Poland, Vietnam, Colombia, Portugal and South Africa.

Pilar’s greatest accomplishment is the success of her students, many of whom have won top competitions like the Nicholl Fellowship, are working on TV shows such as The Walking Dead, Silicon Valley and Grey’s Anatomy, and have sold scripts and pitches to studios including DreamWorks, Warner Bros. and Disney. For more information about Pilar, her classes, consultations, book and podcast, go to www.onthepage.tv

Pilar Alessandra is appearing at the following sessions:

9:00pm You Had Me At Page One - A craft intensive with Pilar Alessandra

Learn writing tools and rewrite techniques that help your script hit the ground running. Through script examples, you will take a hard look at word choice, scene direction, dialogue approach, and the nuances of the page.