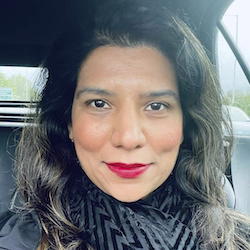 Rajita is the founder of UK based Miraj Films Film and TV production company. She has produced critically acclaimed British shorts Jubilee, Crimson and Lost Paradise funded by UK Film Council and B3Media which premiered at BFI Film Festival. Thereafter she produced And it was the same with my Son funded by BFI & Film London’s ‘London Calling’ which had its World Premiere at Sheffield International Film Festival, winning awards at Underwire, Aesthetica and was Nominated for “Research in Film Award” by UKRI.

Working Internationally, she has also produced critically acclaimed politically and socially charged films with non-actors filmed in Morocco, India and  Israel-Palestinian border.  Zohra:a Moroccan Fairytale premiered at Rotterdam Film Festival and short film 4 Kilometers was awarded by National Geographic. Ladoo filmed with hearing impaired children was made in association with Deaf school of Surat, India and was Nominated for Best Film at AIFF, India.

In 2020 Rajita produced feature film UK-German co-production Love Sarah starring Celia Imrie, Rupert Penry-Jones and Bill Patterson. It was one of the first theatrical releases post COVID-19, charting No. 1 in New Zealand Box Office and No.4 in Australia. Thereafter, it was released theatrically in the UK and was Top 10 on Amazon Apple TV USA and iTunes premiering on Sky Cinema. Love Sarah was released in 50+ countries around the world including Hulu USA.

Rajita was Longlisted for a BIFA in category of “Breakthrough Producer” 2020 and is Film London Lodestar 2021.

In 2021 Rajita was appointed by Arts Council England as a Relationship Manager while also developing a new slate of projects with Miraj Films.