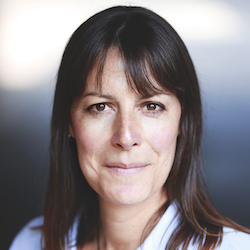 Theatre credits include the world premiere of Rathmines Road at the Abbey Theatre, Dublin for Fishamble; the award-winning Trans Scripts at the Edinburgh Festival Fringe in 2015, revived in 2017 at American Repertory Theater in Cambridge, Massachusetts; The Bear / The Proposal at the Young Vic; and Hamlet at the Gielgud Theatre, London.

Radio credits include Clare In The Community, Life Lines, The Hotel, and 1977 for BBC Radio 4. She has made guest appearances on programmes as varied as Woman’s Hour, Front Row, Loose Ends, Saturday Live, and A Good Read.

Rebecca is also a voice and speech coach, holding the MA in Voice Studies from Royal Central School of Speech and Drama. Her thesis focused on vocal adaptation for trans people, and Rebecca works extensively with this client population. She has presented workshops at international conferences in Chicago, Harvard, Oslo, London, and Mexico City. A selection of her academic papers have been published in Voice & Speech Review (Routledge). She has been a visiting lecturer at such leading drama schools as RADA, Royal Central, East 15, Arts Educational, Birmingham Conservatoire, and Drama Studio London.

Rebecca Root is Patron of the charities Liberate (Jersey) and Diversity Role Models, and is a passionate advocate for LGBT visibility, equal rights and societal acceptance. To this end, she is a regular contributor to news and current affairs programmes on BBC radio and television, ITV, RTE, and print and online news outlets such as The Times, The Guardian, The Independent, The Advocate, and OUT. She has also delivered talks for the UK National Health Service, the Home Office, TSB, and the Metropolitan Police, raising awareness of, and encouraging discourse with the trans community.