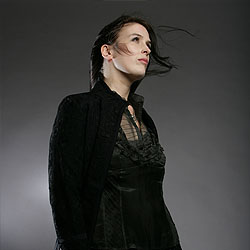 As well as being a cat-loving, tea-drinking Brit, Rhianna Pratchett is an award-winning, twenty-year veteran of the games industry. Her long-term love affair with games started when she was six and played Mazogs on the Sinclair ZX81. It later evolved through her work as a journalist for PC Zone magazine and The Guardian. But it was her passion for storytelling which won through when she moved into game development in 2003, eventually becoming one of the industry’s most respected writers and narrative designers.

During her time in the industry, Rhianna has wrestled the wild beasts of narrative for companies such as Sony, EA, SEGA, 2k Games, Ubisoft, Codemasters and Square Enix. The titles she’s helped bring to life include Heavenly Sword, Mirror’s Edge, the entire Overlord series, Tomb Raider and Rise of the Tomb Raider. Her work has received awards from the Writers’ Guild of America, the Writers’ Guild of Great Britain, DICE, SXSW, and a BAFTA nomination. Rhianna is regularly named as one of the most influential and recognised women in games and has spoken on numerous panels, podcasts, conferences and documentaries. She also has the rare honour of having been interviewed by both Vogue and Playboy.

In the world of comics, she’s worked for DC and Dark Horse (notably Mirror’s Edge and Tomb Raider) and is currently writing film and TV projects with the Jim Henson Company, Film4 and O3 Productions. She lives in London, and likes hard liquor and soft cats.