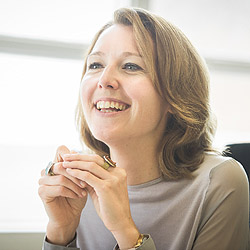 Rhona is Executive Assistant to Frank Spotnitz & Jamie Hall at Big Light Productions, a TV drama production company. Rhona joined Big Light as Frank’s Assistant in 2014, with a background in theatre, acting and casting. She was Assistant to Carol Dudley, as well as Associate Casting Director at the Space Theatre and Acting Like Mad.

As an actor, Rhona’s credits include The Old Vic, Battersea Arts Centre, the Edinburgh Fringe Festival and BBC Radio 4. Rhona began her career as Assistant to the Artistic Team of Unicorn Theatre, chiefly assisting Tony Graham. She formerly wrote reviews and interviews for Culture Wars and Rogues and Vagabonds websites, and remains a member of the Space Arts Committee.

Rhona is now based at Big Light’s Paris office, which she set up.