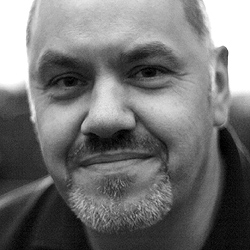 Author, screenwriter and filmmaker based in London and very much into science fiction and fantasy. Short Film Coordinator and one of the core team behind the SCI-FI-LONDON film festival, and ‘the book guy’ at sci-fi-london.com.

Has twice served on the jury of the Arthur C. Clarke Award, has taught science-fiction screenwriting at various schools and universities as well as here at the London Screenwriters Festival and his book, ‘Writing The Science Fiction Film’ is out now.