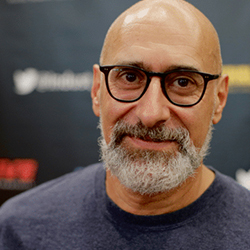 Robert Jones is the co-founder and owner of The Fyzz Facility, a mega-prolific British production and finance company. So far The Fyzz Facility has raised over $250m in film investment, producing and part-funding over 200 independent feature films over the last five years with aggregate budgets in excess of $2 billion.

Robert Jones is appearing at the following sessions:

Executive Producer Robert Jones has worked with everyone from Robert Altman to Christopher McQuarrie, from Keyser Soze to a man-eating Great White Shark. Join the Zoom conversation with a man who is more than an executive. This guy produces.

The Englishman Who Went Up a Hill But Came Down a Mountain
The Usual Suspects
Hard Eight
Gosford Park
Dirty Pretty Things
Sylvia
Vera Drake
The Merchant of Venice
Ladies in Lavender
The Constant Gardener
The Proposition
Run, Fat Boy, Run

The small group sessions with accomplished screenwriting experts not only taught me loads, but made me feel like a worthy, welcome addition to the industry."