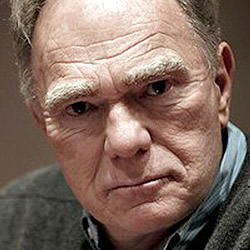 Robert McKee, a Fulbright Scholar and member of the Hollywood Hall of Fame, is the most sought after writing lecturer around the globe. He has dedicated the last 35 years to educating and mentoring screenwriters, novelists, playwrights, poets, documentary makers, producers, and directors internationally.

Those who have learned from McKee have called him “the Aristotle of our time” (Quincy Jones, Ed Saxon, Steve Pressfield to name a few) because of his insight into the substance, structure, style, and principles of the grand art of story. Peter Jackson (writer/director THE LORD OF THE RINGS, THEY SHALL NOT GROW OLD) lauds him as “The Guru of Gurus.” For the creatives at Pixar (TOY STORY, FINDING NEMO, UP, INSIDE OUT), McKee’s Story Seminar is a rite of passage.

Emmy Award-Winner Brian Cox portrayed McKee in the Oscar-nominated film ADAPTATION.   He played himself in the film 20 DATES and the TV series THE SIMPSONS.

In the UK, McKee was awarded the BAFTA for his special entitled “J’accuse Citizen Kane” and twice nominated for his arts programing on the Channel Four series REEL SECRETS.  McKee also wrote and hosted 12 episodes for the BBC’s FILMWORKS series.  His first book, Story, won the International Moving Image Book Award.

Articles on McKee have appeared in hundreds of newspapers and magazines around the world including the Harvard Business Review, the Wall Street Journal, Vanity Fair, New Yorker Magazine, and the LA Times.  Bob Simon of 60 Minutes profiled McKee for CBS news.

Robert McKee is appearing at the following sessions:

If you missed Robert McKee’sa masterclass Tuesday night,  here’s your chance. The legendary screenplay analyst discusses the deep reason we write and tell stories, and the civilizing impact it has on our way of life.

The legendary author and storytelling instructor Robert McKee delivers a masterclass on the deep reason we write and tell stories, and the civilizing impact it has on our way of life.

The opportunity to learn and connect is a huge draw, and this kind of collaboration is vital to the work."