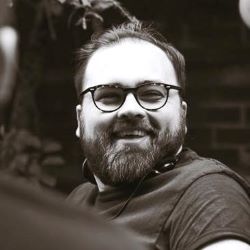 Samuel Gridley is a British director, producer, screenwriter and script consultant. And co-founder and key producer of Milk in First. In late 2017 Samuel directed and produced his debut feature film CRIMINAL AUDITION for Muzzle the Pig and Mordue Pictures which has just sold to Korea, Scandinavia and Benelux. With Cavendish pictures, Samuel wrote, directed and produced his fourth short film A FINAL TRUTH which was picked up for distribution by the global Shorts TV in 2019 after its extensive festival run. In 2018, Samuel worked as associate producer on the short film MY BUTTERFLY starring Noel Clarke, Emma Rigby, and Leeshon Alexander.

Milk in First is a new production company founded by writing and producing duo Luke Kaile and Samuel Gridley after their success with first feature CRIMINAL AUDITION. Milk in First is interested in genre projects that use their tropes to communicate social messages and pertinent, contemporary themes. Projects that strive to tell fresh, diverse, and inclusive stories and/or are authored by those from diverse backgrounds of all kinds.