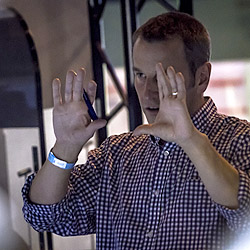 Simon has worked in the TV and film industry for over 30 years and has directed and edited numerous shows for the BBC, ITV, Channel 4 and Channel 5. He started as an editor with Film-Fair, cutting over 300 children’s programmes including The Wombles.

In 1999, Simon wrote and directed the feature film Written in Blood, which has since sold all over the world, and recently completed his second film, a spectacular sci-fi feature Invasion Planet Earth — a passion project which has taken him nearly 20 years to complete. It is due to hit UK cinemas in December 2019.

Simon Cox is appearing at the following sessions:

LSF is an espresso hit of craft and creativity... I defy anyone to leave not buzzing and charged up."