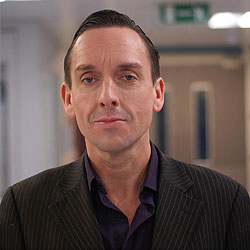 Simon began his TV Drama Career in 2004 at Channel 4 as an in-house Script Reader before moving to BBC Independent Drama Commissioning in 2005, where he worked in Development on such shows as Rome, Hustle, Robin Hood and New Tricks.

He joined the popular BBC 1 medical Continuing Drama Holby City in 2006, first as a Script Editor before rising through the ranks as Series Editor and then as Script Producer, his focus then being on finding, training and developing new writing talent for the show, running Shadow Schemes and working closely with the BBC Writers’ Academy, until taking over as Series Producer in 2013. He has been Executive Producer of both Holby City and Casualty since 2017.

Such a brilliant weekend at London Screenwriters Festival. Such an impressive and inspiring event."