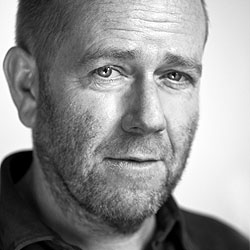 Simon was a translator before starting his writing career as a novelist, adapting his two novels Men Behaving Badly and Wideboy into TV series in the early 1990s. They were followed by comedies including Is It Legal?, My Wonderful Life, several ITV pantomimes, Beast, How Do You Want Me?, Wild West, Hardware and a rebooted Reggie Perrin.

Simon has also adapted for TV The Railway Children, Pollyanna, My Family And other Animals (as The Durrells), and Bafta-winning Just William. Drama films and series include Frank Stubbs, Beauty, Tunnel Of Love, Open Wide, Catwalk Dogs, an episode of Doctor Who, Tommy Cooper: Not Like This Like That, and most recently Finding Alice.

Simon also has worked on the movie Flushed Away, and translated for the stage – Don Juan, and Accidental Death Of An Anarchist.

Simon Nye is appearing at the following sessions:

Zoom Room with Simon Nye, creator 'The Durrells' and other TV smash hits

This is your chance to join an intimate roundtable with one of the kings of adaptation, award-winning author and screenwriter Simon Nye.