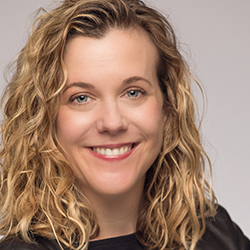 Stephany Folsom was raised in the mountains of Colorado and attended film school in Los Angeles. After graduation, she had many day jobs until she landed a gig working for news outlets and non-profits, producing short documentaries around the world. Eventually growing tired of life on the road, she landed back in Los Angeles and delved back into fiction writing. Her script 1969 A SPACE ODYSSEY: OR HOW KUBRICK LEARNED TO STOP WORRYING AND LAND ON THE MOON made the Black List in 2013.

Currently Stephany lives in Los Angeles with her husband and precocious mutt, where she is a consulting producer and writer on Amazon Prime’s LORD OF THE RINGS. In her spare time, she is showrunning and writing the series adaptation of Brian K. Vaughan’s PAPER GIRLS with Plan B, Legendary, and Amazon Studios.

Stephany Folsom is appearing at the following sessions:

Lord of the Rings (Amazon Prime)