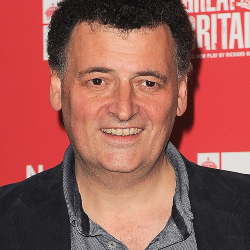 After six seasons as lead writer and executive producer of Dr Who, the Christmas episode was Steven’s last on the show. He was also co-creator, writer and exec producer, along with Mark Gatiss, of the multi award-winning Sherlock.

Steven began screenwriting with the much-loved teen drama series Press Gang, of which he wrote all 43 episodes across five series. He went on to create and write three sitcoms: Coupling, Chalk and Joking Apart. Other credits include his series Jekyll and the feature film Tintin (directed by Steven Spielberg).

Among his many awards, Steven has garnered three BAFTAs: for his Doctor Who episode ‘Blink’ in 2008, for Sherlock (‘His Last Vow’) in 2012 and the BAFTA Special Award in 2012. He has also won two EMMYs for Sherlock: Outstanding Writing for a Mini-Series in 2012 for ‘His Last Vow’ and Outstanding Television Movie in 2016 for ‘The Abominable Bride’. In 2015 he was awarded an OBE for his services to television.

Steven Moffat is appearing at the following sessions: