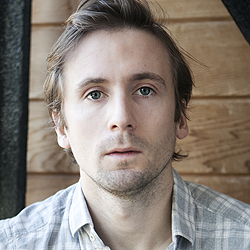 Tom Basden is a three-time BAFTA nominated writer. He is the co-creator and co-writer of ITV2’s flagship comedy series Plebs with Sam Leifer. The fourth series of the ancient roman sitcom aired earlier this year on ITV2, and Sam and Tom are also busy writing a pilot episode for the US version which Seth Rogen and Evan Goldberg’s company Point Grey will produce with Rise Films for Amazon. Plebs has previously won various awards including Best New Programme at the British Comedy Awards in 2013 and Best Scripted Comedy at the RTS Awards in 2014.

Tom has also written episodes for some of Britain’s best comedy shows, including Peep Show, Fresh Meat and The Wrong Mans and created and show-ran Gap Year, which ran on E4 in the UK and HULU in the US.

Tom has written plays for the National Theatre, the Arts Theatre and the Gate and he’s taken plays and solo comedy shows to the Edinburgh, Melbourne and Sydney Festivals. Tom has previously won a Fringe First and an Edinburgh Comedy Award.

The Pitchfest session resulted in requests for scripts and written pitches from all the execs I pitched to, which was fantastic!"