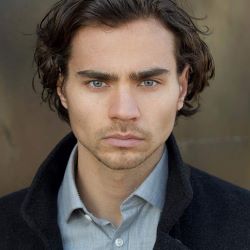 LAMDA trained Tom York is best known for his role as Sam Carne, brother to Demelza Poldark (Eleanor Tomlinson), in the award-winning BBC One period drama Poldark. Sam is a charismatic Methodist preacher who remains keen to save the souls of everyone he meets.

Further credits for television include his lead role of Hero in SyFy’s fantasy drama, Olympus alongside Sonya Cassidy; Endeavour; FX series Tyrant; Midsomer Murders, Death in Paradise and comedy drama Agatha Raisin. He can currently be found on stage at the Park Theatre starring in Corpse!, a comedy thriller about twins Evelyn and Rupert Farrant, the former plotting to kill the latter, with high drama and disastrous consequences, playing until March 28th 2020.

Tom is also a proud ambassador for the charity CLIC sergeant. CLIC helps young people with cancer, and supports them and their families as they make their way through treatment.

Tom York is appearing at the following sessions: