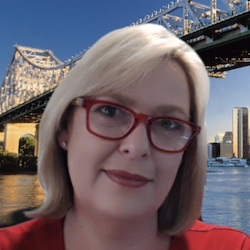 Trish Curtin is an emerging Australian Screenwriter in Brisbane, Queensland. An ambivert and keen collaborator, she is currently in various stages of development, pre-production and post-production on a diverse slate of projects for TV and film, both scripted and factual, but is most focused at present on her role as creator and writer of an original limited comedy series for streaming, Outback Rebel. Her television credits include five 13-episode seasons as a child reporter on Boomerang! an Australian kid’s show that aired internationally in the U.S., Mexico, Australia and South East Asia. She is an active voting member of AACTA, the Australian Academy of Cinema Television Arts.

Trish serves as Administrator of Myers’ GITS affiliated facebook group Zero Draft Thirty, an online global screenwriters’ group focussed on craft and community. She also served as proof-reader for Myers’ upcoming book: An Introduction to Character Driven Screenwriting and Storytelling — The Protagonist’s Journey, soon to be published by Palgrave MacMillan.

Trish Curtin is appearing at the following sessions: