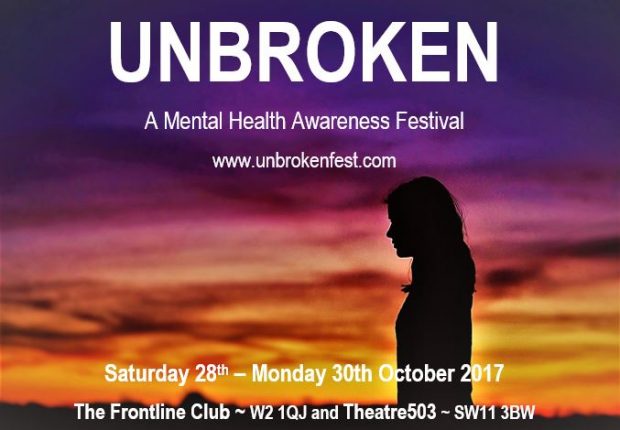 Let’s talk about mental health.  As creative people, storytellers who are used to inhabiting other people’s lives and sharing both their stories and our own with the wider world, it should be easy, right?  Perhaps not as easy as you’d think.  Like anyone else, we can find it hard to be honest about how we’re really feeling when the answer is anything other than ‘fine, thanks’ or, if things aren’t going too well, the typically understated ‘not too bad’.

It is somewhat ironic that the very people who can find it easier to empathise with others, who work to understand them – because without understanding another person or character, how can you possibly hope to communicate their story? – are also those who are often afraid to speak out, to tell the truth about their mental health, for fear of being seen as even more ‘flaky’ than most ‘arty types’ are usually assumed to be.  More paradoxical still is the fact that the very nature of our work – often deeply fulfilling but frequently unreliable, intense but transient, personally satisfying but poorly paid – with all the uncertainty that it entails, both financial and emotional, is more likely than a number of other professions to inspire mental health issues or to exacerbate any that already exist.

With all this in mind, on World Mental Health Day 2016 my small theatre company, Shadow Road Productions, launched a new mixed arts mental health awareness festival, UNBROKEN, at Theatre503, with the express aims of increasing awareness of the issues surrounding mental illness, reducing any attendant stigma by opening up the conversation, and confounding expectations as to what exactly a production about ‘mental health’ might involve!  We were astounded by the success of this debut and the resulting feedback from so many people whom, it seemed, had been waiting for just such a forum as this where they could share their stories and learn about others, all while spending an evening laughing, crying and being entertained.

We are thrilled that 2017 will see the festival expand to include the inaugural UNBROKEN Short Film Prize, allowing the exploration of the vital issue of mental health via yet another art form.  As a long-term LSF and Guerilla Masterclass delegate, I am even more delighted that the LSF’s founder and creative genius Chris Jones has agreed to help judge the competition!

Once again, we were surprised by the enthusiastic response we received – from America, the UK and Germany to South Africa, Singapore and beyond!  The numerous entries from across the globe have now been narrowed down to a shortlist of eight, all of which deal with the issue of ‘mental health’ in very different ways.  We have been deeply moved by many of the films submitted to the Short Film Prize, particularly when we discovered some of the personal stories behind them and the wish of their creators to share them with the wider world.

All of the shortlisted films will be screened on Saturday 28th October at The Frontline Club in Paddington between 2.30-4.30pm.  There will also be both an interval and a Q&A with some of the filmmakers, before the audience have the opportunity to vote for their favourite film.  Prizes will then be presented to the recipient of the Audience’s Choice award, along with the Winner and the Runner Up, as chosen by the judges.  Finally, in keeping with LSF tradition, there will be time for everyone to chat and network with the film makers, festival organisers and fellow audience members as we adjourn to the nearby Fountains Abbey pub at 5pm!

Tickets for the screening are available here: www.ticketsource.co.uk/event/EMHFGE.  They usually cost £12 but, as alumni of the LSF/Breakfast Club/GFilm, the discount code ‘LSFSPECIAL’ will get you 20% off any tickets you book!

The full festival programme is available on the website – www.unbrokenfest.com/2017-programme – and you can find out more about the individual films on the Shadow Road Facebook page, where we are currently running a series of ‘Meet The Filmmakers’ posts.

We hope to see you there on the 28th – do please come and say hello if you make it!

About Emma King-Farlow
A writer, director and producer, Emma King-Farlow is the Artistic Director of Shadow Road Productions, the Festival Director of UNBROKEN, a part time library manager and a traditionally published children’s author. @ekingfarlow