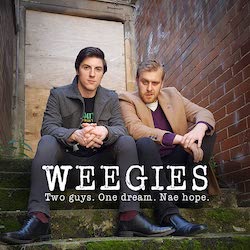 New College Lanarkshire performance graduates Arthur and Campbell quickly realised they’d have to make their own content if they wanted their creative voices and their love for their native Scotland heard. Their £4K secured through a successful Kickstarter campaign quickly disappeared into the series and out of nothing – emerged Weegies (slang for Glaswegians). A fresh and funny take on two hapless actors trying to make it in Scotland.

In August 2021, the first series of Weegies was launched exclusively on Prime Video in the UK & US, and has received positive reviews from the public and the media.

How did they do it on no budget?

Stephen Arthur is a trained actor and writer, graduating in 2016 with a First class Honours in BA Acting from New College Lanarkshire.