with Russell Lewis and Amy Thurgood
moderated by Rachel Paterson 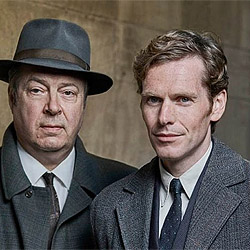 Get ready for a forensic analysis of Endeavour Morse, his enduring appeal and legacy.

Join us as we interrogate Endeavour Screenwriter Russell Lewis in a candid and in-depth session into how he managed to reinvent a classic character. Find out what he think makes Endeavour a success, what makes Morse unique and what’s the secret to developing an enduring detective series.

Script Editor Amy Thurgood joins Russell for this exploration of a classic character in an outstanding series that just keeps going from strength to strength.

How was Endeavour conceived? How was it pitched and sold? How do you approach a prequel series? What makes crime in the 60s different from crime now, and how can you still make that resonate with today’s audience?

Credits include: Endeavour, Call the Midwife

Amy has previously script edited a wide range of shows for both UK and international audiences.

Credits include: Murphy's Law, Between the Lines

Russell is the writer, creator and executive producer of 'Endeavour', having written every episode of the long-running series.