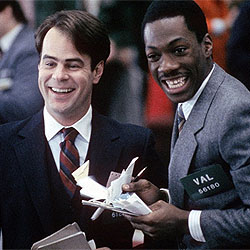 British Screenwriter Timothy Harris wrote some of the most enduring comedies of the 80s: Kindergarten Cop, Twins and the Eddie Murphy/Dan Aykroyd Trading Places.

What was it about his writing that attracted some of the biggest movie stars of a generation? How have these films survived despite the notoriously NON-evergreen nature of comedy?

In this session, referencing clips from these films and more, Timothy will provide an in-depth analysis of comedy in film that still holds up decades later. Additionally he will discuss:

Figuring out what makes audiences laugh is a constant struggle for writers and filmmakers alike. Access to a comedy mind like Harris is a fantastic opportunity to get ahead of the curve for delegates.

Timothy is a BAFTA nominated Screenwriter, Author and Producer.