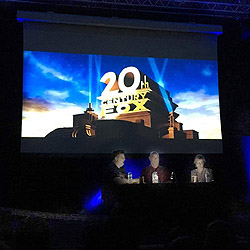 Read the script, watch the film or TV show, then meet the writers, filmmakers and producers at the festival.

This is a rare opportunity to get access to the script that was taken to set of some of our favourite classic movies, then follow them through the journey of production, examining changes which can be discussed during the session at the festival.

We will also run a Script To Screen LIVE with a major feature film, like the ones we ran at previous festivals with Jim Uhls and Fight Club, W. Peter Iliff and Point Break, Carl Gottlieb and Jaws, Joel Schumacher and The Lost Boys, Joe Eszterhas and Basic Instinct, Ted Tally and Silence Of The Lambs, Dave Reynolds and Finding Nemo and Jeb Stuart with Die Hard.