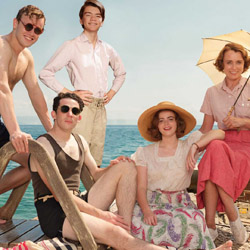 He created some of Britain’s favourite comic characters in “Men Behaving Badly”, adapted from his own novels. He delighted the child within us with his adaptations of “Pollyanna”, “Just William” and “The Durrells” (from “My Family and Other Animals”). He left us wanting more with his latest hit “Finding Alice”. This is your chance to join an intimate roundtable with one of the kings of adaptation, award-winning author and screenwriter Simon Nye.

The script chat will take place on Monday, August 2nd at 8pm. Watch out for an email from us with the Zoom link and get your questions ready.

Credits include: Men Behaving Badly, Reggie Perrin and The Durrells

Simon was a translator before starting his writing career as a novelist, adapting his two novels 'Men Behaving Badly' and 'Wideboy' into TV series.

I recommend LSF, not just to writers but to all storytellers – the actors, directors and producers – because something quite magical happens when we mix."