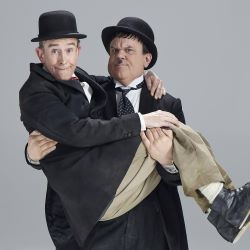 Appearing in 107 films in a dazzling three-decade career, Laurel and Hardy are built into the bedrock of classic Hollywood comedy. Last year, the film Stan & Ollie, written by Jeff Pope, took audiences on a magical journey behind the curtain of these stars of vaudeville, film, and television. The performances of Steve Coogan (Stan Laurel) and John C. Reilly (Oliver Hardy) are transformative, bringing back to life these epic comic powerhouses.

Read the script first, then come see the boys get in another fine mess with screenwriter Jeff Pope in attendance delivering a live chat track. He will discuss the challenges of telling the story of such legendary superstars. How much must one pay tribute to their legacy, while still telling the tale of the men behind the legend?

The London Screenwriters’ Festival’s Script to Screen presentations have become a consistent source of enlightenment and entertainment throughout our long history. This one promises to be a whopper. Don’t miss it.

Jeff Pope is an Oscar® and Golden Globe-winning British film and TV writer and producer, known for his scripts for Philomena and Stan & Ollie.

The Script Chats were open, informative and leisurely."