with Loretta Preece and Jon Sen 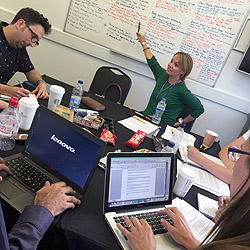 The Writers Room… One whole day writing an episode of a TV show.

We will fling successful applicants right in at the Screenwriting deep-end by recreating an authentic one day long Writers’ Room experience (to be run Thursday BEFORE the main festival).

Created by BAFTA and EMMY Award winning Screenwriter Barbara Machin (Waking the Dead), the LSF Writers Rooms will give successful applicants a look behind this slightly mysterious curtain and offer a real life experience of collaborative creative writing under pressure; all delivered while under the guidance and leadership of some of the best professional Showrunners working in the UK today.

Expect to be challenged and fulfilled in new and exciting ways you’ve never experienced before – we’re going to take you so far out of your comfort zone, you’ll never want to come back! 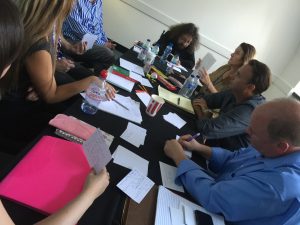 Here’s how the LondonSWF Writers Rooms are going to work:

The Writers Room will run for a whole day on the Thursday of festival week (Date TBC) at Regent’s University.

We will announce the specific writers rooms closer to the festival and each will be  focused on a specific genre of Television. These may include…

Medical, crime, sci-fi, comedy, drama, period drama and long running series (soaps). The genres we choose will be dependent on the showrunners we can get to commit to the experience.

Each room will be headed up by a professional Showrunner who specialises in the genre. The Showrunner will select a specific cancelled TV series which selected participants will be expected to research extensively ahead of their Writers Room experience.

The day will start with a group briefing by the Showrunners, covering the basics of the experience, how the rooms will run (ground rules and etiquette) and the ultimate aim of each one. Participants will then separate into groups and join their Showrunner in their writers room.

The aim will be to create a detailed 3-5 page step outline for an episode of their designated Television series.  This will simulate a real-world experience of collaborative writing under pressurised conditions with a real deadline.

Participation is by submission only.  Submission criteria will be:

* Note there may be additional requests from the individual Showrunners that follow. 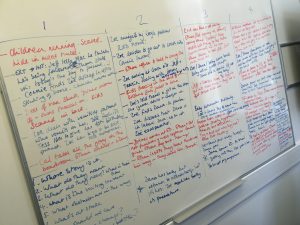 All submissions will be read by the LSF reading team with the Showrunner making final decision and thereby shaping their own Writers Room from a shortlist.

Six places are available on each Writers Room and you MUST be a full delegate of LondonSWF to apply.

‘The whole day was exhilarating. It gave me massive creative sparks and I’m very proud of the episode we created. We had so much fun, everything about this session was incredible!’
Omar Kha

‘Being in a writers room is as tough as hell, yet immediately rewarding’
Chris Armstrong, Screenwriter

‘Before I came, I was terrified about how I would cope in a room full of talented writers pitching their ideas. Actually, I left the workshop feeling empowered’
Rachel McAdam, Screenwriter

‘The Writers Room was brilliant! We story lined a hour of Casualty with Lucy – a really talented Casualty producer. I’d recommend it to anyone!’
Rachel Paterson, Screenwriter (Casualty)

‘This was so valuable. The experience of a pitch written under pressure was awesome. Please take the chance to do this session. It will change the way you work and operate as a writer’
Lee Burgess, Screenwriter

‘The Writers Room was everything I hoped it would be – a real eye opener into the workings of a flagship continuing drama. It created a lovely atmosphere where any idea could be put on the table then morphed, stretched, hammered and even thrown out entirely. The work itself was an absolute joy and a real chance to put into practice the various lessons I’ve learned through years of sessions, advice and tutorials from LSF and beyond.
Philip Lawrence, Screenwriter (Eastenders)

‘Barbara Machin is an inspirational dynamo!  I want to be her!’
Tracey Parsons, Screenwriter

‘It was great to work collaboratively with so many; fantastic to share ideas. The energy in the room was great!’
Ann Hawker, Screenwriter

‘The Writers Room was a brilliantly challenging experience which introduced me to a new world of collaboration and creative ideas. It will pull me up to be braver in my ideas and more fluid in storytime structure’
Luke S Jones, Screenwriter

‘I nearly didn’t apply to the Casualty Writer’s Room because I didn’t have a medical TV script sample. You told me to go for it with my best writing sample. And happily I was accepted! It was an awesome experience of collegiate creativity; so much fun to see how a Writers’ Room works and to meet some great writers – and best of all to see that the sum of our ideas was something really entertaining!’
Caroline Dean, Screenwriter

‘The Writers Room has helped me improve my confidence as a writer, helped fuel my ambition, reinforced many positives and challenged misperception and fears that I have nurtured regarding writing for BBC Serials. Lucy was warm, witty, positive, encouraging and EXCELLENT!’
Ed Connole, Screenwriter – 5 Stars!

PitchFest is a great opportunity to meet talented writers with innovative scripts."