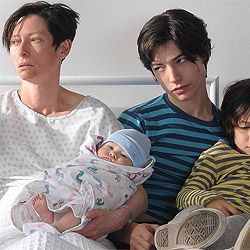 How do we write searingly authentic characters, addressing deeply human and often social issues, through a cinematic lens that is haunting and beautiful?

Meet Lynne Ramsay who has made a career examining and creating films that leave us often breathless. Her career has spanned three decades, working with unknowns and movie stars alike, while tackling genre stories alongside social issues.

In conversation Lynne will discuss the collaborations, trials, misfires, success and just plain dogged perseverance that brought us You Were Never Really Here, Ramsay’s most recent award-winning adaptation of the novel by Jonathan Ames.

They will be talking about Lynne’s previous projects such as We Need To talk About Kevin and Ratcatcher, and her unique approach to adapting novels into film. If your work is both haunting and uncompromising, this session will inspire and educate in equal measure.

Credits include: We Need To Talk About Kevin, You Were Never Really Here

She has consistently received critical acclaim and won Best Screenplay in Cannes for 'You Were Never Really Here'.