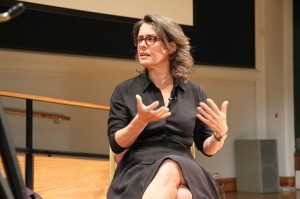 Mad Men writer and producer Lisa Albert in conversation with Mary Kate O Flanagan took us in depth though the scripting process as we together watched an early episode of the series, stopping and starting and going over the wheels within the engine. It was quite an odd way to view the show. For one, I don’t think I’ve ever watched a TV episode in a room with a couple of hundred people before. One might think the stopping and starting would frustrate the experience of enjoying the flow and enjoyment of simply watching, as might the dissecting of a drama I’d usually like to watch. On the contrary, the show was as, if not more, enjoyable and delicious to see as the women on stage took it slowly apart before our eyes and we got to really see the way the characters had been written. It’s a bit like the fun of peeking inside a cuckoo clock to see what the people do when they’re not popping out of doors with umbrellas.

Talking about the series beginning Lisa Albert explains that they had no idea anyone would ever watch this, AMC was a tiny channel and it was only after the first series that they became more aware of things as the show had grown in popularity.

This early in the series things are still being established for the characters and become revealed in their words and actions. Pete has a frat boy style with his friends and exhibits his ‘married man’ maturity with his wife. He and Don establish that their personalities rub up against one another when Don makes a snipe. Women are either ignored and infantilised or noticed and sexualised. Those who are more adult seem noticeably so but Lisa states, looking back she sees the characters are all pretending to be grown up.

The more specific details are in a screenplay the better. A moment when Trudy compares a sink to ‘The Pierre’ was changed to that from ‘A Hotel’ in the script, the specific reference adding more tone than a generic one could. Action too makes a statement and Betty’s character is a complex one but learning that she was a child helped them understand her better. The lock of hair she gives to a child while inappropriate is more to do with her childish mindset than any deliberate perversity of nature and helped settle some argument that had broken out in the writers room about the action. Characters change over the course of seasons and the Betty in season five is not the same Betty of season one but some traits will remain hers. She’s a complicated woman and while people warm more easily to Peggy and Joan, Betty is a character that Lisa has liked to champion for episode time.

Don Draper too is a complex personality, he acts quite terribly but everyone roots for him anyway, which Lisa credits entirely to actor Jon Hamm’s talent. Costume too plays it’s part, particularly with the women. Lisa Albert herself was an extra in one episode and had to put the foundation garments on, of which there are layers. Back in the early days of the series nobody wanted to do Period Drama, she tells us. A lot of the original writers room had read the script seven years before it came into production and they were finally put together to make it. It was good though, the quality of that script had helped Matthew Weiner get his Soprano’s work. After the success of Mad Men other dramas of the period came and went, Playboy Club and Pan Am being two shows that were cancelled. As to Mad Men’s longevity Lisa says that the secret to success is write a complex show. 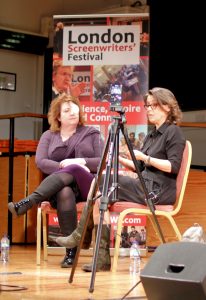 There are a large number of women writers on Mad Men, more than any other show Lisa thinks. Although there is sexism in the show, Lisa hopes people see that this is a feminist show. The pilot told her that this was going to be a show that was really going to deal with the women’s lives, that we’d leave those offices and follow them, which is something that interested her.

On the process of writing it there were originally around seven of them in the writers’ room. It’s very personal in there and can get very contentious and she knows things about her fellow writers that she will take to her grave. As the popularity of the show grew they became aware of their relationship with an audience too. Everything is finalised in the writers’ room and episodes are shot as written, not a semicolon being changed on set. They research of course, mandatory reading the first year was Revolutionary Road and she tries to read as much as she can, plus they have advertising advisors.

The first Golden Globe came during The Writers’ Guild strike so there was no ceremony, but they watched Jon Hamm turn into a star overnight, it was bizarre. The series to date is running strong and the expectation is that it will be renewed again for another season. Nothing is set in stone though she says, which doesn’t prevent a large amount of smiles and good will in the auditorium towards this incredible show and writer/producers like Lisa who make it so.