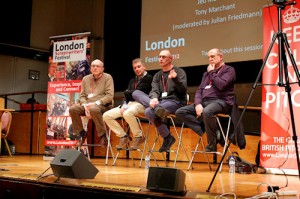 “I’m a great believer in the front row.” Says one delegate as the room fills up for this seminar on TV writing. Just a couple of rows behind I can’t help thinking that up at the front absorbing to these talented writers.

Julian Friedmann led discussion and questions with his own knowledge of repping TV writers as things kicked off with a chat about how it’s getting harder to break into TV as there’s not so many ‘gateway’ shows giving writers their first break as there used to be. A number of writers give put themselves through post-graduate degrees but that’s not a green card to get in the door of television writing these days, but certainly consensus was that the discipline of having created a body of work and learned to work under deadline pressure was very useful for a TV writer to have, often for that reason shows may want more experienced writers to take on an idea. Jed Mercurio pointed out that to really promote yourself as a professional you have to stand up for yourself while you have an opportunity to pursue and this is how he got to write his own work when the production company didn’t initially want to trust someone they didn’t know to do it.

Writing for soaps came up as a question topic and Tonly Marchant pointed out how difficult it can be for those writers, obviously with a lot of topics having been covered by long running soaps, that it can’t be underestimated how soap writing is not the poor cousin of TV drama that it’s sometimes made out to be. “Writing for soaps can numb your voice, and it’s challenging to find your expressiveness in them.” With social networks, gaming and other pursuits making a real dent in TV audiences he thinks soaps can have an incredible effect on tackling issues that society notices, in the past they’ve kicked off debates in the Commons and national news about the issues they’ve been dealing with.

In terms of new serial drama all agree on the huge importance of getting the first episode right, particularly in this time where audience numbers are dropping, there is a lot that a first episode must achieve to hold a viewing audience enough to keep them there for the entire run of the drama series and there’s a huge pressure for it to be right from that outset. “You can’t underestimate how important the first episode is,” Tony advises, “you almost have to chuck the kitchen sink in.” Julian asks about whether a writer should when sending in their series outline with a sample episode, write episode three rather than episode one to avoid that pressure initially, until the series has been looked at the writers strongly come out in favour of sending the first episode only, and that you have to prove that it works and can hold an audience by making that sample episode brilliant.

The good news is that there is work for television writers out there. Christopher Walker quotes figures of credited writers and there is lots of work still to be goteen. The trick is getting in the door, the writers agree. Having an agent comes up as being of recurring importance to get your work read quicker and your ability being professionally regarded. None of the path to breaking in is easy. There is however still far more work for you in British television than there is for you in Hollywood. A thought I’ll certainly remember when getting up that three hours early to toil away on my keyboard!