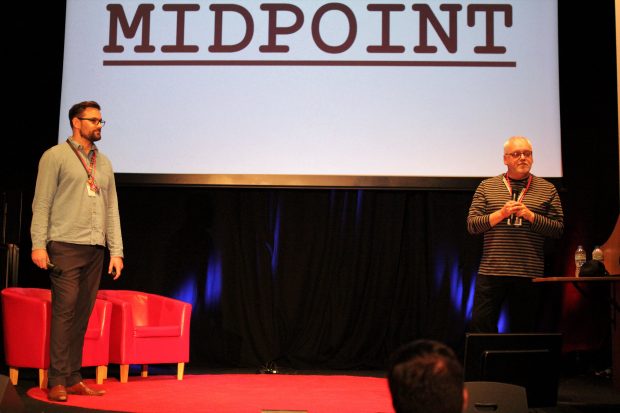 Regent’s University, has been the longtime venue of the London Screenwriters’ Festival and it’s picturesque landscape and comfortable facilities are a great place to come together to talk about story. The university is now the third ranking uni for media courses in the UK and course leader Philip Hughes along with lecturer Ted Wilkes joined in this year to talk about that crucial screenplay element, the midpoint, and how it can be used to reveal what a story is really about. Here are three top tips from the session that should help you make your midpoints something to work forward or back from because they are the heart of what your story is really about.

It’s Called The Midpoint Because it’s in the Middle.

Touching on The Hero’s Journey and a five act structure that fits into three acts as a way to frame where the midpoint resides, it’s clear that the midpoint is a field of study that can take something like a university course to fully explore and master because it falls into the category of story structure, and of those there are many. But as the name suggests the midpoint falls right at the central time point of your story and does the same thing no matter the story structure you’re using. Not only is it, timewise, at the middle of the story, it’s also the emotional centre of the story which can then be crafted outwards in all directions from that crucial realisation point. In short, the emotional revelation that happens half way through a story determines a character change affecting how the protagonist moves forward and illuminates their actions. It’s the structural and emotional pivot point.

The Midpoint is the Keystone of Your Story

Without a keystone you don’t have a film. Great drama comes from change. In the keystone of a story, characters begin to recognise their psychological needs.

In ‘The King’s Speech’ the new King George, struggling with his stutter opens up emotionally for the first time to his speech therapist, a common man, about the extremely traumatic private elements of his childhood. In ‘Silence of the Lambs’ young FBI agent Clarice tells stories of her childhood to Hannibal to get him to help her. These events in characters lives have become part of their adult personalities, the part that drives them or holds them back. Finally, the King finds connection. Finally, Clarice understands what drives her.

The midpoint then is the point of the script where the real challenges become clear and for the characters to realise that they are more challenged than they think so that the audience can recognise what the story is really about (theme).

You Can’t Put It Back In The Bottle

Once the midpoint of the story has been reached, there is no turning back for the rest of the film. Something irrevocable has occurred. The character’s former path has been eclipsed by their own emotional truth which cannot now be denied.

When Michael Corleone in ‘The Godfather’ takes a life illegally for the first time, he has accepted he has to become a gangster to stop the men who threatened his father in the restaurant.

These great shifts in behaviour stem not from the end of the story but are forged at the midpoint, the emotional centre of the story where the protagonists facades fall away and they are forced to commit to their inner emotional selves in a way they hadn’t envisaged. It’s simple but it’s complex. It’s tied to story structure and rooted in emotion, it’s worthy of study that takes more than an hour long seminar. But it’s easy to see from the examples given that the heart of a story resides in the midpoint and getting that crucial pivot point right can pull the rest of your story structure into a cohesive narrative whole.